“A flag may be defined as a piece of pliable material, attached at one end so as to move freely in the wind, serving as a sign or a decoration.”
– W.G. Perrin 1922

Long before modern flags were invented early civilizations carried wooden staffs whose tops bore carved symbols of earthly rulers or gods. These early flags were used in the same way we use flags today to signal or to demonstrate loyalty. In ancient Rome legions and cavalries used a standard, or ‘’vexillum”. As well there are numerous references to flags in the Bible. Numbers 1:52 (NIV) The Israelites are to set up their tents by divisions, each of them in their own camp under their standard.

The origin of the English word “flag” is unknown, but the first known word dates from the 16th Century. The French word Drapeau is borrowed from the Italian drapello, which was the “banner” of a feudal lord. Hung on a lance it allowed soldiers to distinguish between their allies and enemies on the battlefield.

In the 16th century, banners became real flags and gained a new purpose, both an emblem and a means of communication, a flag represents one’s sense of belonging to a nation, culture, cause, history, or camp.

A flag’s strength lies in its simplicity and the effectiveness of its representation. A flag embodies the image of a group or community.

What is flag bunting?

Bunting is a specific type of lightweight textile fabric used for making flags. The term originates from the German word bunt meaning “strong bright colours”. Bunting was originally a cotton or worsted wool fabric originally sourced from Suffolk and Yorkshire, UK. The bunting was a plain open weave not unlike cheesecloth and scrim or gauze is a very light textile made from cotton, or sometimes flax.

Since the late 1970’s the highest grade of flags uses various staple-spun fabrics. Our company uses a specialised staple-spun fabric with high strength and durability which can be dyed in the piece or left white for individual dying. We use the term “Woven Defence Force bunting “with a weight of 165gsm. 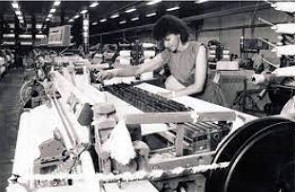 In the 1900’s flag bunting was made by various Australian manufactures Bradmill, Birkmyre and James Nelson. During the 1970’s Australia’s textile mills had to deal with the tariff reductions at a time when wool prices and labour costs were going up, further reducing their competitiveness. Today we source our bunting cloth from a privately held Australian based textile company. Australiana Flags is inspired by a desire to operate in a more ecologically sustainable manner so we will be moving to a range of recycled cloth bunting. The company offers a returns service for retired flag bunting to convert fibre into new fabrics reducing the impact on the environment. 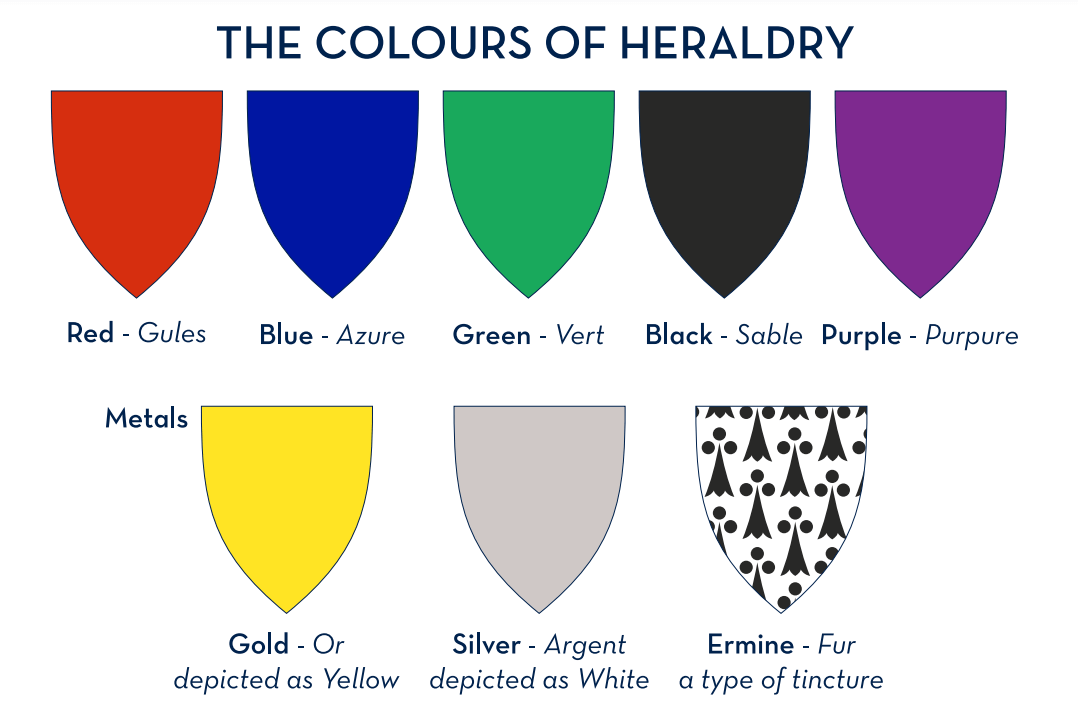 In Europe Tenè (Orange) was recognized. The colours yellow and white are treated as two ‘metals’ or and argent (gold and silver) even when they consist as cloth. The use several ‘furs ‘, such as ermine (white with black markings) but except for the Royal Standard they seldom appear on flags. 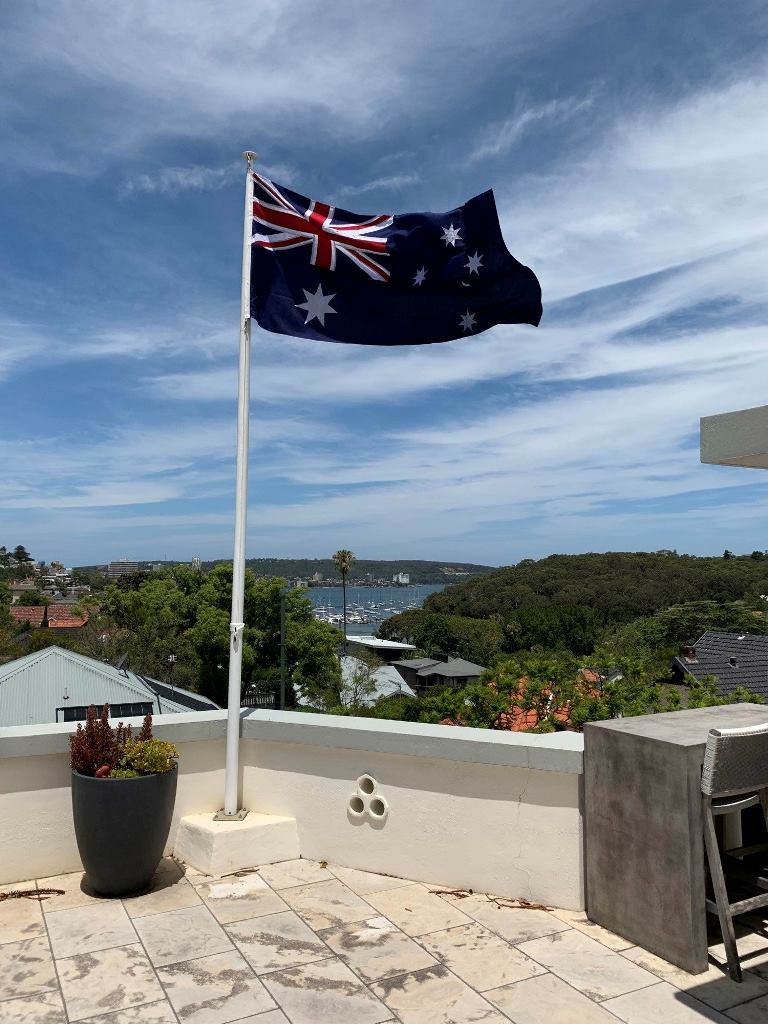 A flag of distinction flying high and proud.

As an authority on flags, we can offer recognised methods and options in selecting a flag.

There is no ‘standard size’ for a flag so to ensure we provide you with the best advice we will always ask questions on where it would be used i.e., flagpole, building, vessel a parade and so on. Please find listed below charts with recommended traditional flag sizing standards.

Flags are made in traditional Ýard’ sizes and they are referred to by the measurement is taken from the heading to the fly. Another method used is in terms of breadths, one breadth being equal to nine inches. Thus a 3 yard flag would be termed 6 breadths.

Flags are available in various sizes and shapes. Flags of full colour make using the best faric bunting, There is no better way to enhance your flagpole or stand with dramatic colour, movement and height. Our flags are made in traditional sizes. They are referred to by by the length of the longest edge, for example a flag that is 6 foot x 2 foot (1830 x 915mm) is known as a 2 yard flag. We supply flags in sizes listed below as well we provide a ‘Bespoke’ service. Please contact us to discuss your needs. 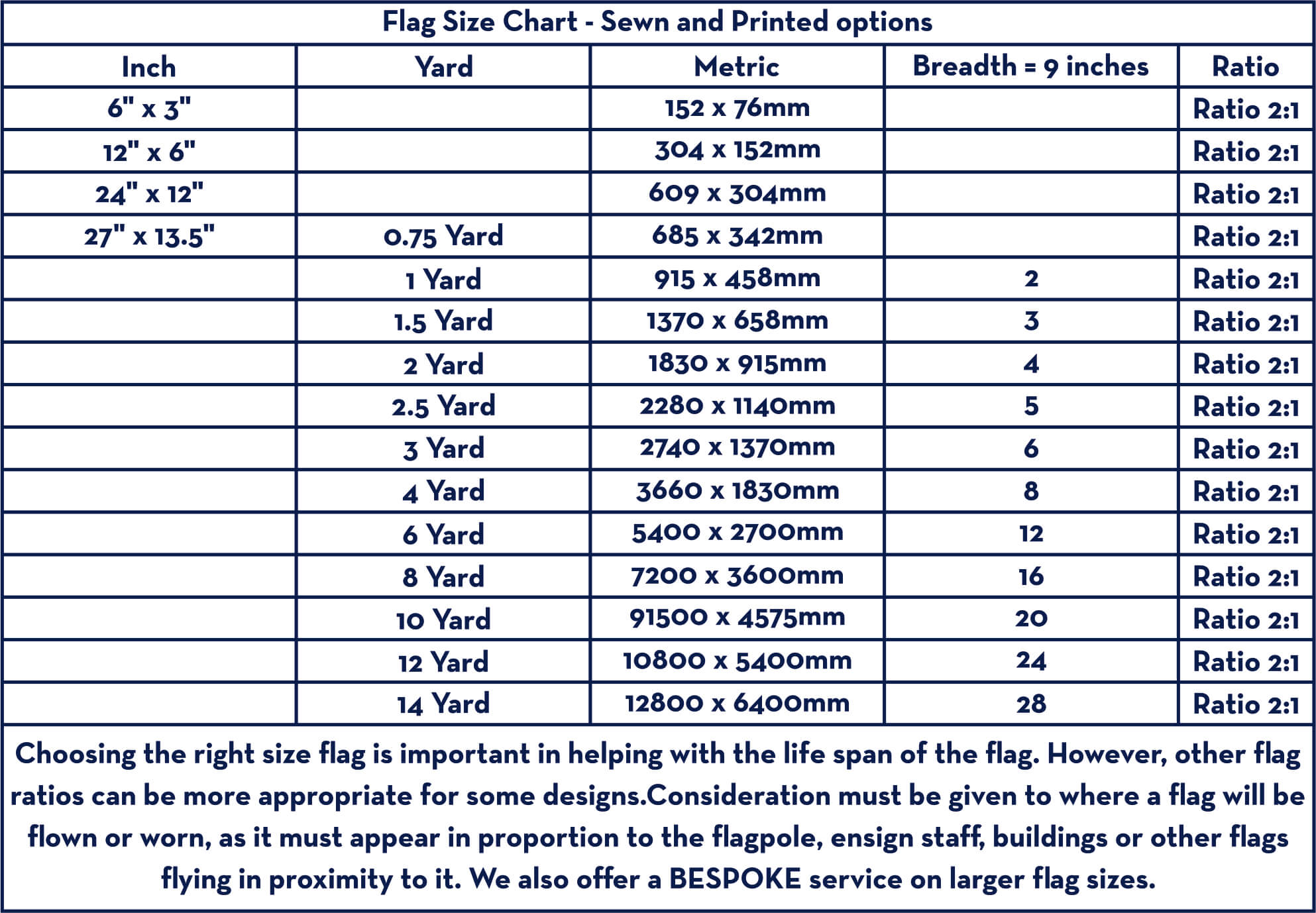 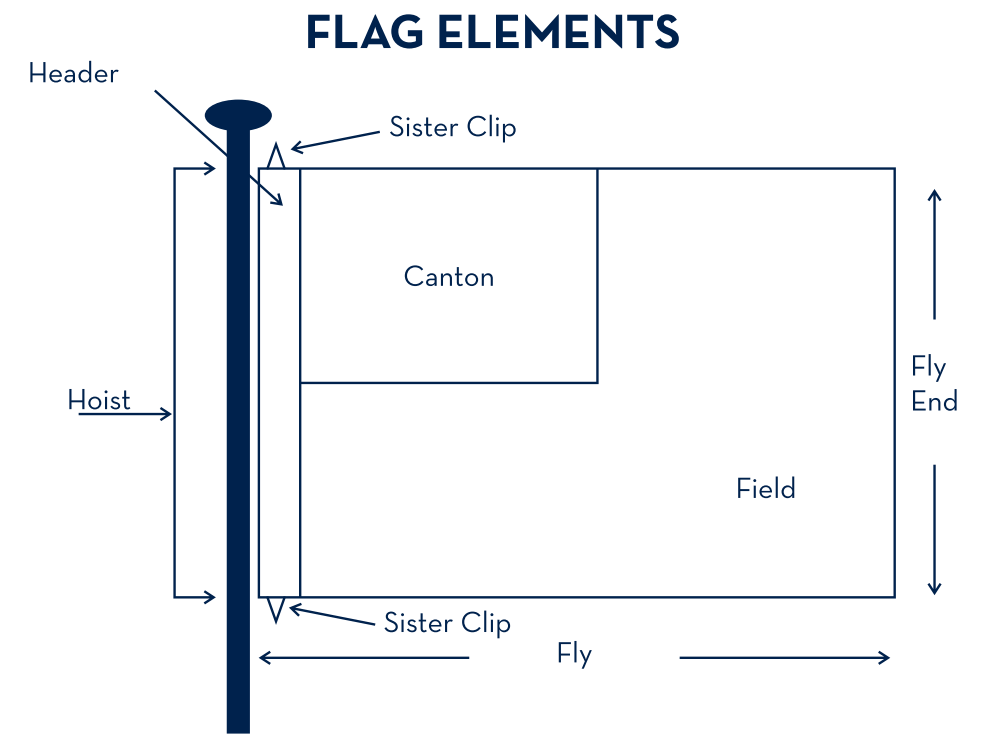 A flag is distinguished by its colour but also by its shape and proportions. In Australia the most understood term is describing a flag as a ratio 2:1 ratio describes the length compared to the width (breadth) of a flag or 3:2 ratio. In most other countries the ratio is expressed in a reversed way. The percentage of flag ratios in other counties are as follows: 45% of the national flags have a 2:3 ratio, 28% have 1:2 ratio, 9% have a 3:5 ratio, 18% have completely different ratios. 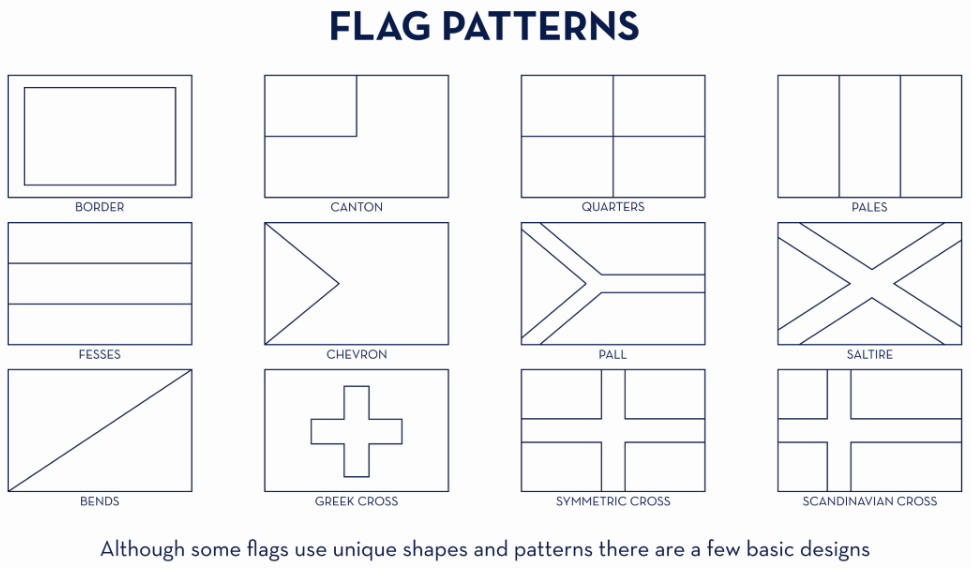 Banner (baniere) – a flag or other piece of cloth bearing a symbol, logo, slogan, or other message.

Church Pennant – a tapered pennant on a naval ship meaning the ships company is at Divine Service.

Colour – a large military infantry flag that is unique to a regiment. They normally two flags issued simultaneously Queen’s Colour and Regimental Colour.

Commission Pennant – a long narrow flag flown from a warship to indicate its commissioned status.

Courtesy Flag – the flag of a country being visited by a ship or vessel from a different nation.

Ensign – is another term for flag and is flown at the stern of a vessel or ship especially associated with naval flags of nationality (civil ensign) and by extension in Australia with distinguishing flags of Government services on land.

Flag – is a piece of fabric most often rectangular or quadrilateral with a distinctive design and colours.

Oriflamme – a banner with pointed ends.

Pennon (Pennant) – a narrow, tapering flag commonly flown by ships at sea. It can have several shapes, such as triangular, tapering, or triangular swallowtail.

Pilot Flag – A distinguishing flag flown by a vessel requiring or carrying a pilot.

Prayer Flag – a small flag to express a prayer as it flies.

Racing Flag – a special flag flown by a yacht when racing.

Signal Flag – a number of flags of recognised design to transfer information.

Standard – a rectangular flag on a pole with an emblem a heraldic design of official rank of sovereign designed to ‘Stand’ in one place.

Windsock – a flag shaped like a sleeve attached at one end to a ring or staff and open at the other. 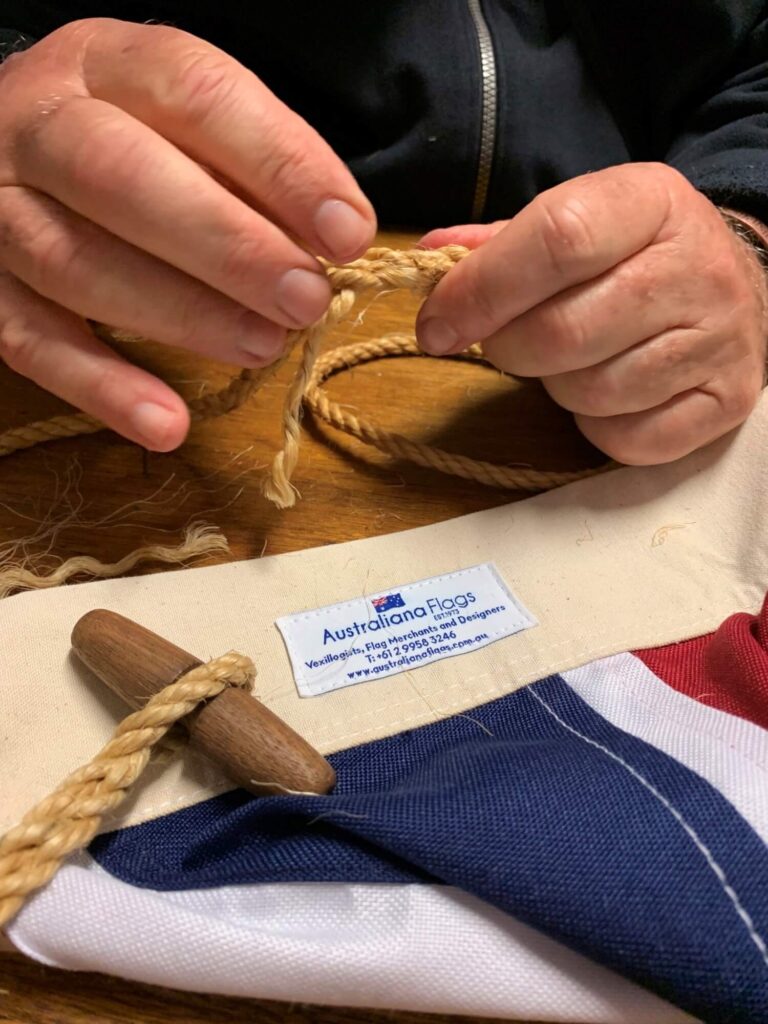 Appliqué – This is when one piece of flag fabric sewn on top of another.

Badge, Device, Motif, Emblem, Charge, Coat of Arms – Describe all the different designs and symbols that appear in the field of the flag.

Canton – This can be any quarter of a flag referring to the top left quarter next to the hoist.

Colour Fast – An important property of the flag fabric which prevents colour migration.

Eyelet or Grommet – A ring pressed into the header of a flag for attaching a halyard.

Field – The back-drop fabric for the whole flag and may be covered by other details on the flag.

Fimbriation – The narrow border which separates two other colours.

Flagpole – A wooden or metal vertical pole used to hoist the flag.

Fly – The longer, top edge of the flag, including the length of the top edge, traditionally the half of the flag furthest from the leading edge. The fly may be forked or swallow-tailed. If the end of the fly is divided by a simple incision is called a slit. The fly may be produced into several pointed or round-ending tails which are called tongues.

Fly End – The longer, top edge of the flag, including the length of the top edge, traditionally the half of the flag furthest from the leading edge.

Header – This strengthens the leading edge optimally with a webbing tape.

Hemming – This is made by forming a narrow-folded edge in a fabric and sewing it to prevent fraying or unravelling of the weft or weave. Hemming can be single stitched but also twin or triple stitched.

Hoist – The Heading or leading edge of the flag, attached to the halyard, mast or flagstaff, may also refer to the vertical height of the flag. The action, to hoist a flag, refers to raising it aloft by means of a halyard (rope).

Length – The horizontal span of a flag along the top or bottom edge from the hoist to fly end.

Obverse Reverse – The front view of the flag when the hoist is correctly positioned next to the mast or halyard. The other (back) side is known as the reverse.

Sister Clips – Used to attach the flag loops to the halyard allowing flags to fly.

Seaming – This is when the joining two separate pieces of fabric together to make one. Overlaid seaming is commonly used on flags. The seam allowance is folded over on each edge and interlocked before sewing.

Toggles – Used to attach the flag loops to the halyard allowing the flags to fly.

Tricolour and Bicolour – This is when a flag comprising vertical stripes of different colours Tricolour, 3 stripes, Bicolour 2 stripes.

Yard Sizing – Traditionally the diagonal measurement from one corner to the other corner of the whole flag. Yard sizing has now become a more nominal reference. 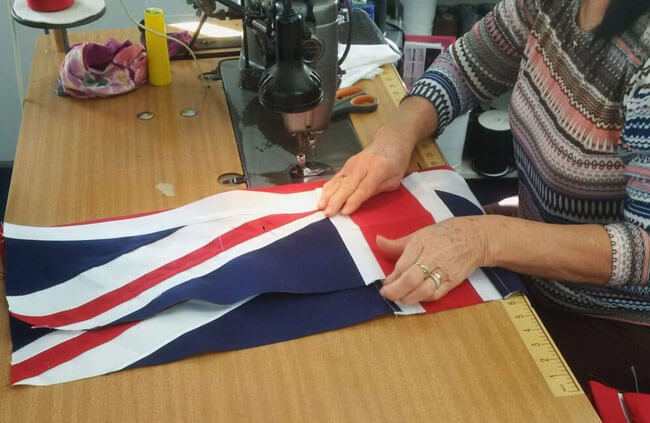 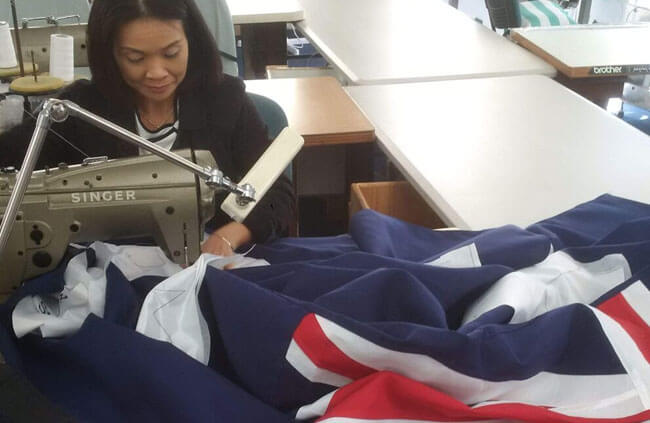 Sewing the Australian National Flag in one of our Australian workrooms 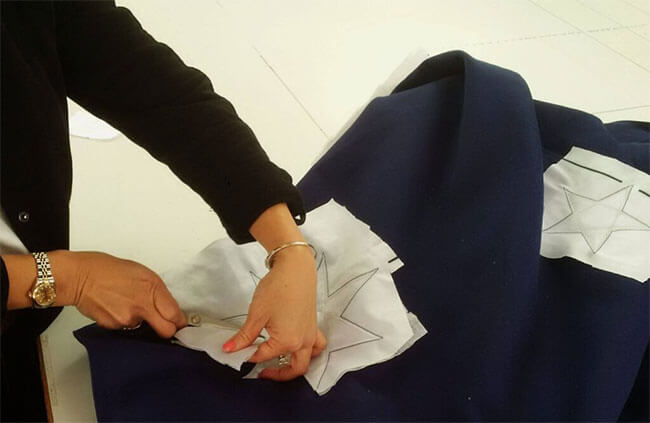 For nearly 50 years we’ve been renowned for our passion for absolute accuracy and precision craftsmanship. From stitching and hand-finishing and through to the latest technology, we’re constantly evolving to ensure we produce only the highest quality flags.

Our traditions, technology and technique include: 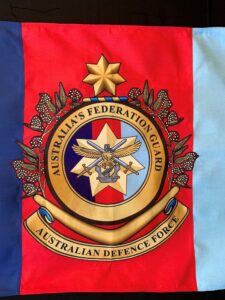 Close up image of dyed and sewn complex badge