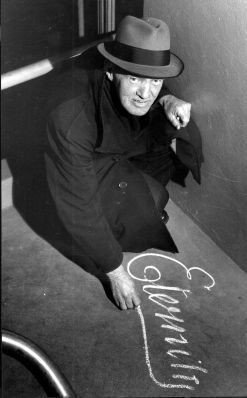 Arthur Stace (1884-1967) In 1930 the evangelist John Ridley preached on “Eternity” in the Burton Street Baptist Tabernacle, Darlinghurst, NSW (now The Eternity Playhouse). In the congregation was Arthur Stace, a stretcher-bearer in World War I, before becoming an alcoholic and criminal, but who had been converted at St Barnabas’ Broadway and then joined Burton Street. Stace was illiterate and had a troubled background but loved Ridley’s preaching: “I wish I could shout ‘Eternity’ through the streets of Sydney!” The challenge captured Stace’s imagination. Leaving church that evening he felt called to use some chalk in his pocket to write “eternity” on the street. He used an elegant copperplate script to write it around the streets every night, and the word became a Sydney landmark. Stace was an early graffiti artist. By the time he died in 1967 he probably wrote the word half a million times.

The climax for the word came in 2000 when “Eternity” lit up at midnight on Sydney Harbour Bridge. This single word was shared with the whole world.