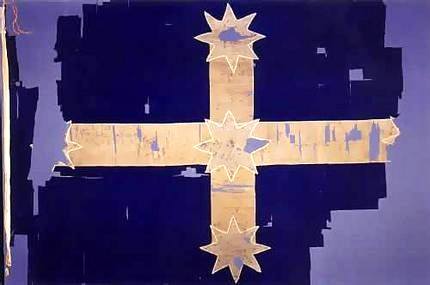 Flown during the battle at Eureka Stockade, Ballarat, Victoria. This Southern Cross design was the symbol of a group of miners under the leadership of Peter Lalor. They were protesting the high cost of gold mining licences and other grievences. It was first flown as the standard of the Ballarat Reform League on 29th November 1854. After the storming of the miners’ stockade by troops and police, on the 3rd December, 1854, Trooper John King retained the flag until his death in 1881. His widow passed it on to the Ballarat Fine Art Gallery where it is on public display.