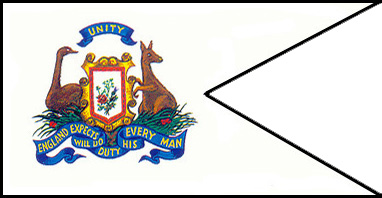 It was flown by John and Honor Bowman at their farm, “Archerfield” near Richamond, New South Wales in 1806. The Bowman family were celebrating the victory of the Royal Navy at the Battle of Trafalgar which took place on 21st October, 1805. This is believed to be the first flag designed in Australia and it set the precedent for the use of the emu and kangaroo on our national coat of arms. The English rose, Irish shamrock and Scottish thistle indicate the unity and origins of the early settlers. The words beneath the shield were taken from a famous flag signal raised during the battle. The Bowman flag is on display at the Mitchell Library, Sydney.